Shortly before visiting South Africa, I read Lost and Found in Johannesburg,* Mark Gevisser’s wonderful memoir combining family history with an exploration of the ruthlessly fashioned spatial absurdities of the city of his birth.

As a child obsessed with maps, Gevisser noticed that parts of Johannesburg seemed uncharted, that city’s geography was “bizarre” and “eccentric”. Neighbouring areas – such as the wealthy, white, suburb of Sandton and the poor, black, township of Alexandra – were separated by an apparently uncrossable divide. The divisions of the Johannesburg of Gevisser’s childhood and youth were to an extent a consequence of the Group Areas Act of 1950 and the resulting forced removal of “Non-Europeans” (later revised as ‘Non-Whites’) from areas designated as reserved for “Europeans” (“Whites”).

Apartheid laws, however, were only the most blatant institutional measures of racial segregation that had marked South African society since the arrival of the first European settlers in the 17th century. When Johannesburg was founded in 1886, fortune hunters flocked to this rapidly expanding gold mining settlement from across the world, as well as from elsewhere in South Africa. English, Afrikaners, Jews, Chinese, Indians and black Africans were amongst the incomers, the racial and ethnic hierarchy mirroring that of other parts of South Africa.

For a glimpse of these early years, on my first day in South Africa I went to Braamfontein Cemetery, inaugurated in 1888 as Johannesburg’s first public burial ground. I was accompanied by Anthony Paton of Gauteng province’s tourism authority; though he knows Johannesburg incredibly well, it was also his first visit to the cemetery.

Apart from a few indigent men who had created rough shelters in the cemetery, Anthony and I had this peaceful, rarely-visited place to ourselves. Now a well-cared-for city park, the grounds boast a splendid mix of eucalyptus, jacaranda, oak, cypress trees and the odd palm. Foreigners all, they were planted a century or so ago in this once dusty burial ground on the treeless grassveld where Johannesburg was fast growing. Today the trees act as something of a buffer to the traffic noise from the busy M1 highway running alongside the cemetery. As well as providing a measure of shade for the occasional visitor, the trees also accentuate the divisions imposed on the dead.

Reflecting the demographic pattern of the surrounding city, the cemetery was strictly demarcated by religion and ethnicity, zones that are immediately apparent from even just a casual of inspection of the tombstones – or the lack of tombstones. “Civic fathers”, Mark Gevisser points out, “set boundaries in death as in life”:

On first glance it had, quite reasonably, to do with religion. The southern portion of the Old Cemetery [….] had been consecrated for Christian denominations – ‘Dutch Reformed’, ‘Nonconformist’, ‘Roman Catholic’, and ‘Church of England’ – while the northern portion seemed to be reserved for other faiths: ‘Chinese’, ‘Coolies’, ‘Cape People’, ‘Mahomedans’, ‘Kaffirs’, and – my favourite – ‘Christian Kaffirs’, this last exposing the fiction that it was about religion at all. It was, of course, about race.

If Braamfontein Cemetery is known at all, it is as the final resting place of Enoch Sontonga, a teacher and Methodist minister from South Africa’s Cape Province. In 1897 Sontonga composed the hymn Nkosi Sikelel’ iAfrika (God Bless Africa), which was first recorded in 1923 – in London, sung by the writer, activist and ANC founder member, Solomon Plaatje in its original Xhosa. 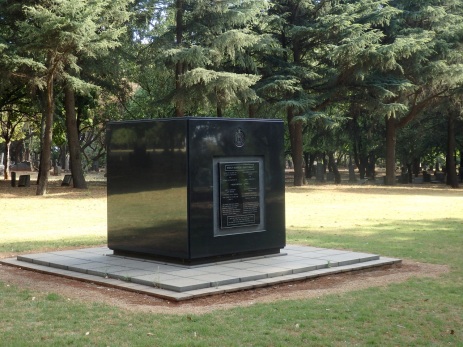 Over the following years, Nkosi Sikelel’ iAfrika gradually became widely known, becoming synonymous with the South African liberation struggle. Following the downfall of the apartheid regime, the song has formed since 1994 the first section of the national anthem, a rarity for being both rousing, moving and beautiful. (The anthem’s second section – Die Stem van Suid-Afrika, or The Call of South Africa – conforms to a more traditional mould. With its music and lyrics drawn, in an act of reconciliation, from the previous anthem, this throwback to the days of apartheid is still sometimes heard, in particular at international rugby fixtures when it is enthusiastically sung by the mainly white crowds.)

In September 1905, at the age of just 32, Sontonga died in poverty and obscurity. He was buried in the part of Braamfontein Cemetery assigned to “Christian Kaffirs”. Of the of the original 12,000 or so burials here, today only Sontonga’s plot is identifiable, an ugly mausoleum made of black granite having been placed in 1996 where he lies. Originally graves of black Christians were marked by crosses made of wood, but these have long-since disappeared. Now the entire area is simply covered by a slightly eerie expanse of grass, with a row of trees partially separating it from the plots reserved for dead white people.

The gravestones elsewhere in the cemetery point to the diverse backgrounds of the deceased – where they were born, their religion, perhaps a hint of what brought them all the way to Johannesburg and, sometimes, how they died.

In the centre of the cemetery, probably not accidentally forming a buffer between the areas reserve for Christians and “heathens”, is the large, densely packed, area for Jews. In the late 19th and early 20th centuries, considerable numbers of Jews arrived in Johannesburg, fleeing pogroms and poverty in Eastern Europe and in search of better opportunities abroad. Amongst the arrivals were Gevisser’s great-great-grandparents who, like a large proportion of Jewish immigrants in South Africa, were originally from Lithuania. It was to locate their graves that Gevisser visited Braamfontein Cemetery.

Anthony and I, however, were unable to find the entrance to the Jewish section. As is the custom for a Jewish cemetery that’s located within a larger burial ground, a high wall encircles the Jewish area. Presumably to guard against possible acts of desecration, the wall is now topped by barbed wire, and through this we could just about peer over to view the shtetl on the other side.

Other areas of the cemetery are easy to wander through. In the Hindu section lies Thillaiyadi Valliammai, a martyr of the passive resistance movement that was led by Mahatma Gandhi when he worked as a lawyer in South Africa. The 16-year old daughter of Tamil immigrants, Thillaiyadi died in 1914 in prison where she was being held for protesting a change law that to only recognize Christian marriages or others under the registrar of European marriages. Jewish ceremonies were therefore lawful, but marriages (and crucially inheritance rights) involving Indian Hindus were not.

An imposing monument marking another anti-racist martyr features prominently in the cemetery’s Chinese section. In 1907, Chow Kwai For – an immigrant from a southern Chinese island and isolated by language from his mainly Cantonese-speaking compatriots – registered under Asiatic Registration Act. Unaware of the protests organized by Gandhi against the pass laws, the 24-year old Chow hanged himself as soon as he realised that he had broken ranks with the protestors. Engraved in Chinese on Chow’s tombstone – paid for by a sorrowful Chinese community – is the text of his suicide letter:

I am going to leave the world, but I must give a public explanation as to why I intend to commit suicide. Therefore, I address this letter to my countrymen. Since I came to South Africa, I have only been in domestic service. My dialect is quite different from that of my countrymen, with whom I have very seldom associated. I am always in the house of my employer, who had advised me to re-register. At first I refused to do so, but I was informed that I would be dismissed from my employment. I thought that I would have to lose my situation. Therefore, I was obliged to register, but I did not know the degradation that would follow until my friend talked to me about the registration matter and showed me the translation of the Law. I found that I would be treated as a slave, which would be a disgrace to myself and my nation. I was not aware of all this before. Now it is too late for me to repent. I cannot look my countrymen in the face. I hope all my countrymen will take warning by my error.

In a subdued way, Braamfontein Cemetery is a moving memorial to the emergence of Johannesburg, its many divisions and the early struggle for racial equality.

My Tweets
Join 3,298 other followers

Only the last evening in July – but something of an end of summer feeling.
Tropical Walthamstow (northeast London).
Temperance 🍷 🍺
He says that he has resigned. Based on his record, in all likelihood this is just another of his lies. Still, he seems to be believed by the world’s press – such as here teams from CBC, CNN-Brasil and something East Asian
Loading Comments...
%d bloggers like this: