I hardly know anything about Grace, my father’s aunt and the sister of my grandmother, Edith. Grace Goodbody, as she was then, was born in 1891 in Maidstone, Kent, where she and Edith were brought up in their father’s pub, the Fortune of War. In 1919 Grace married Dublin-born Frederick Woodhead, and soon afterwards the couple left England to start new lives in South Africa.

Over the years my grandmother would receive letters, photos and the occasional gift from Grace who apparently was living with the growing Woodhead family in Boksburg, a mining centre to the east of Johannesburg. My father would carefully soak and peal the stamps from the envelopes and then add them to his album. Unfortunately, the letters weren’t similarly collected. Just as my grandmother hardly maintained contact with her siblings who remained in Kent, it wasn’t long before she also lost touch with her family members in far-off South Africa. (Grace died in 1954, followed two years later by Frederick. My grandmother, as far as I’m aware, didn’t maintain contact with her niece and nephews.)

Growing up I recall having been told that Grace’s daughter, Margaret, had married an Afrikaner police officer whose surname was Grobler. Against the background of uprisings against South Africa’s apartheid regime, my parents wondered what duties officer Grobler was performing.

This vague story was circulating in my mind as I explored a few of the nooks and crannies of Johannesburg’s labyrinthine Collectors Treasury. This is by far the largest secondhand bookshop in South Africa (and quite likely the largest in the southern hemisphere) and it also sells old records, postcards, magazines, cameras and general bric-a-brac.

Collectors Treasury is located on Commissioner Street, a major artery passing through Johannesburg, with this particular section lined with old workshops, warehouses and anonymous-looking office blocks. These now semi-abandoned buildings are on the southern edge of Hillbrow, an inner-city neighbourhood that during the 1970s and 80s was something of a liberal, multi-racial residential rarity – despite its designation as being reserved for whites under the Group Areas Act.

Since the end of apartheid in the early 1990s, central Johannesburg has undergone vast changes to its economic and demographic profile. Most white-owned businesses and nearly all of the remaining white residents moved out, relocating to Johannesburg’s leafy northern and eastern suburbs, unwilling to share the city centre with black people who were at long last free to live wherever they could afford. Today while much of the city centre throbs with street life, outsiders usually consider great swathes of it as being ‘no-go’ areas. That’s certainly how Hillbrow is viewed, but in contrast the area around the Collectors Treasury is quiet, though perhaps slightly eerily so.

As soon as one enters Collectors Treasury, the ghosts of families such as that of Grace’s make their presence felt. The narrow book-lined, staircase leads to the main floor, where tens of thousands of books and collectables (of a total stock of around two million items) overflow onto the floor from shelves and tables. Owned and run by Geoff and Jonathan Klass, Collectors Treasury was started in 1974 and has been in its present home since 1991, the brothers purchasing the eight-story building just as most local white business-owners were selling up. Hopefully they got a good deal.

I have no idea what, if any, books were ever read or owned by Aunt Grace – quite possibly none if she was at all like her sister Edith. Nevertheless, viewed as a whole, the books and other items here offer unique insights into the cultural, political and economic leanings of the white population of Johannesburg, as well as those of Southern Africa more generally. And as I wandered around, I couldn’t help but wonder what became of Grace and her family, the great bulk of items here having been sourced, one way or another, from white English-speaking families. Could some of the Woodheads’ possessions be found scattered here?

At first glance the stock seems to be utterly chaotic, but in reality everything does seem to have a place and Geoff and Jonathan Klass know exactly what they have. As I made my way across the shop floor to the ‘South America’ bookshelves, other books caught my attention. Harking back to a time when Africa was considered a burden of empire, a continent that Britain was in the forefront of ‘civilising’, there were titles like Empire Problems and Travel (1935), The Native Problem in Africa (1928) and, with a more positive slant, Mother Africa Hits Back: The Native Problem and its Solution (1948).

Other sections are carbon copies of those of a good secondhand bookshop back in Grace’s home county of Kent. Just William and Biggles stories seem to have been as popular amongst English South African children (including, who knows, my father’s cousins) as they were back in ‘the mother country’ in the 1920s and into the 1950s, while titles such as The Boy Scouts Imperial Jamboree Souvenir Volume (1924) are reminders that the Scout movement had an early presence in South Africa – hardly surprising given Robert Baden-Powell’s empire links. There are local and regional maps, business directories, farming manuals and, in this sports-mad country, football, rugby and cricket annuals, dating back to Johannesburg’s early years, well over a century ago.

Interspersed with the printed material are tables laden with gramophone records and display shelving with china celebrating coronations and royal weddings. One gets a sense of how English dance music remained popular in South Africa into the 1960s and a reminder that South Africa remained a dominion, under British monarchs, until 1961. 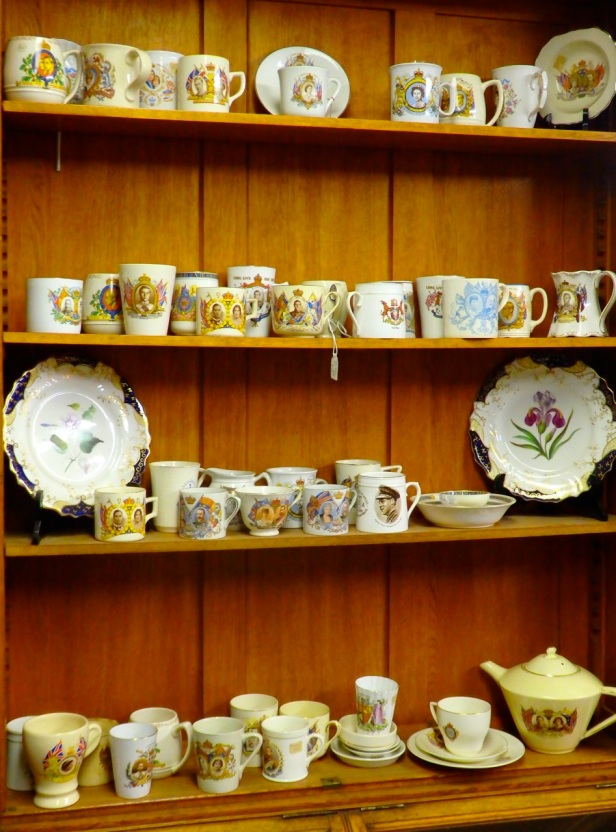 Regardless of the subject matter of a book, the musical genre of a record, the pattern or image depicted on a piece of china, or where these things were produced, every Collectors Treasury item is a time capsule. Perhaps one of these once belonged to Aunt Grace.

If you stumble across this and happen to know what became of Grace and Frederick Woodhead and their family, please get in touch!